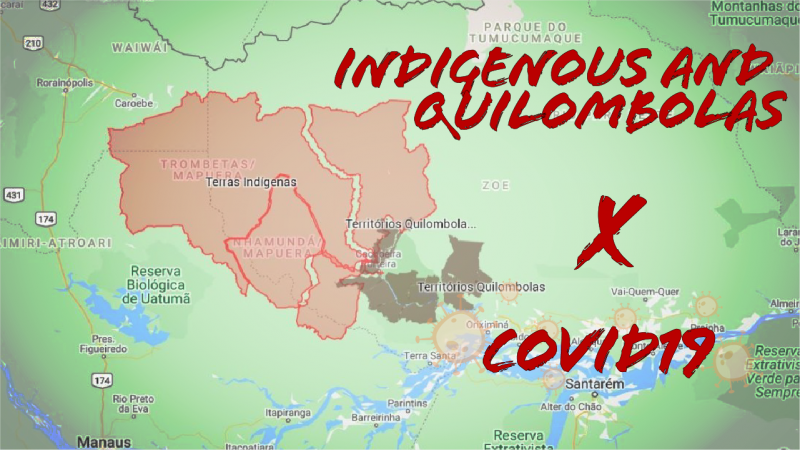 In addition to the immense challenges already known about territorial recognition and protection of territories, Indigenous and Quilombola people are facing new challenges in the pandemic.

Traditional people and communities are among the most vulnerable to the new Coronavirus. In the villages and in the quilombos, the situation is further aggravated by several factors, including the non-flow of production, which directly affects food security in the territories. This is because most of the communities’ income comes from agriculture, but at the moment, they are unable to sell their products in the nearest municipalities.

Many of these communities are also unable to access emergency assistance from the State, due to different difficulties, such as lack of access to the necessary technology and tools (cell phone, internet, and telephone signal), problems in registering, lack of assistance for answer questions, among many others.

Specifically in the traditional communities of the Calha Norte Region there is a complex cluster of protected areas, such as indigenous lands, conservation units and quilombola territories (which in some cases are overlapping). 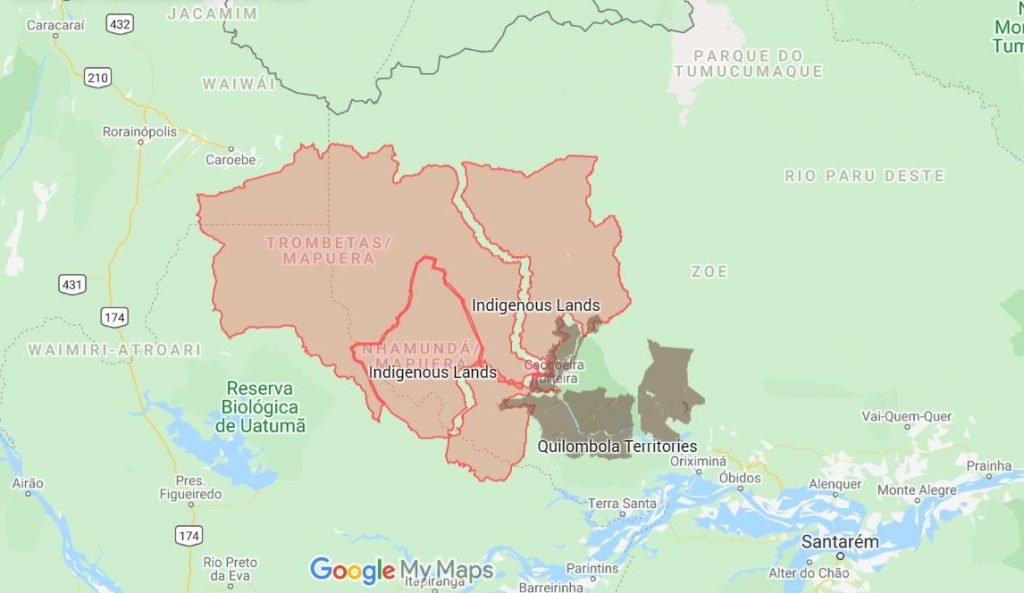 These territories are difficult to access and displacement is done mainly by river, which makes transporting products for trade more expensive. With travel restrictions between municipalities due to measures to contain the Coronavirus, such transportation becomes even more difficult, although this measure is necessary at the present time.

The lack of effective public policies affects the recognition, infrastructure, health, education, security and other rights of Quilombola and Indigenous communities.

This reality in a COVID-19 pandemic scenario represents an even more serious risk for Indigenous and Quilombola people. It is necessary to understand that this threat does not affect communities in the same way as in other populations in the country because this disease has a type of progression based on socioeconomic and infrastructure indicators.

The impacts of the pandemic are numerous and are affecting communities. Today, it is already possible to say that these impacts will leave its mark in the future. Therefore, it is essential to create strategies with the communities to minimize these impacts, strengthening the income generation, the recognition and the visibility of these communities.

Given this context, the maps presented here show different levels of vulnerability in this scenario that is a health, economic, and social crisis. The basis of this analysis was the knowledge of several factors that influence, and sometimes even determine, the level of impact of the virus’s dissemination. Initially, several data from quilombola and indigenous communities living on the banks of the Mapuera, Cachorro and Nhamundá, Trombetas, Cuminá/Erepecuru and Ariramba rivers were analyzed.

The main goal of this analysis is to give visibility to the different realities of the traditional populations of the Amazon in the face of this pandemic, since this information can subsidize the prioritization of contingency and support measures, whether from non-governmental or governmental organizations.

When analyzing the data, the way in which they relate to each other was also taken into account, to understand, for example, as the presence of an airstrip, combined with the absence of a health professional and a high percentage of the elderly population, can make one village more vulnerable than another. Thus, it is possible to show what the priority actions are and where they should be implemented in a more emergency way. The situation is complex and, therefore, requires analyzing more than numbers, it is necessary to look for their origin, location, extension and, mainly, how they can correlate with other field data.

This mapping was performed based on the Multicriteria Analysis method. The result is shown on three different scales, considering the most important data for villages, communities, territories and municipalities.

Thus, the data can be useful to provide as much information as possible to decision makers at different levels: government, community, business, civil society, etc.

But before exploring the map results, it is important to know who the Indigenous and Quilombola peoples of the region are!

The maps presented here involve different Indigenous peoples who live on the Mapuera, Cachorro and Nhamundá rivers. These peoples use the territory’s natural resources for their survival through hunting, fishing and gathering. The demarcation of Indigenous land is of crucial importance for the survival, quality of life and cultural reproduction of these peoples who live there. There are three indigenous lands shown on the maps:

In these Indigenous lands live the following ethnic groups: 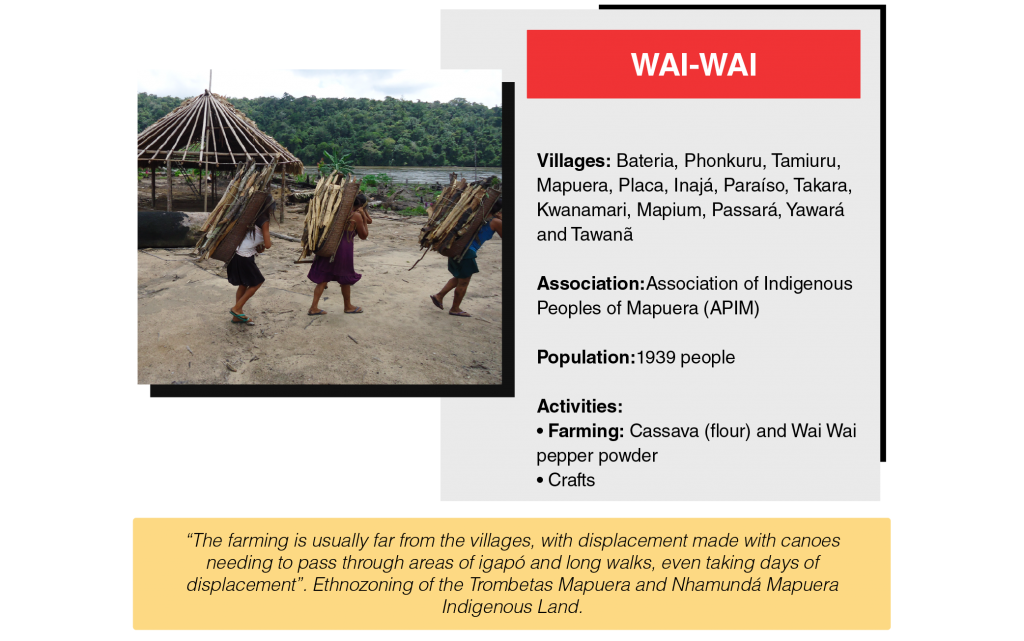 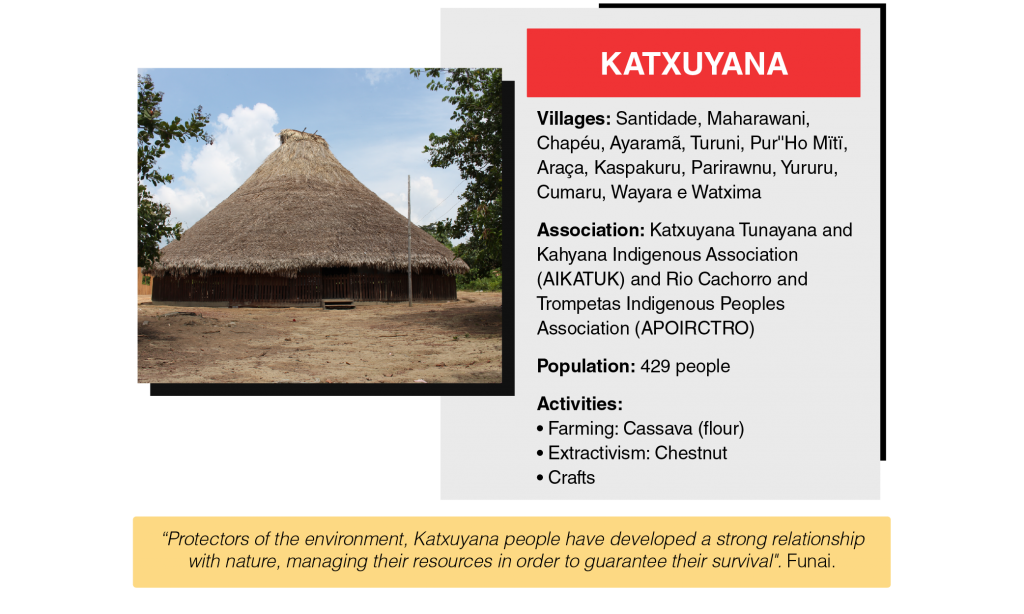 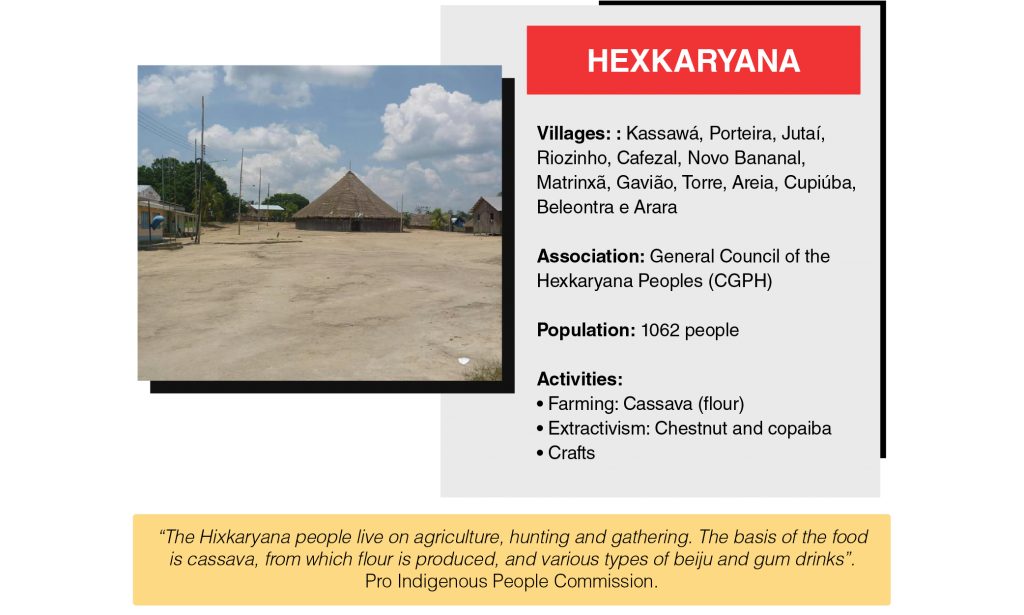 The maps presented involve 07 quilombola territories and their communities that live on the Rio Trombetas, Cuminá/Erepecuru and Ariramba rivers, they are: 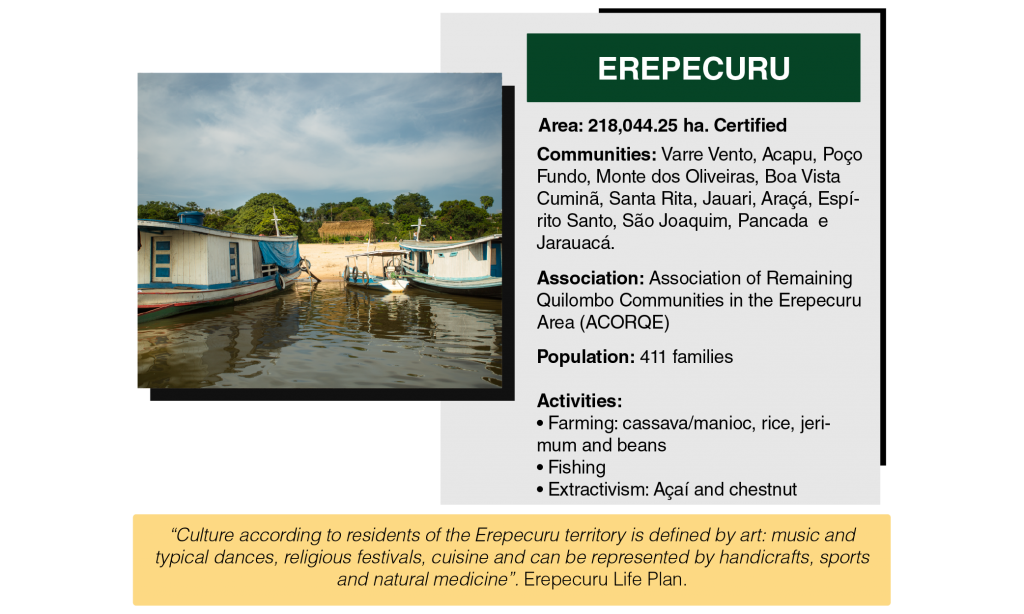 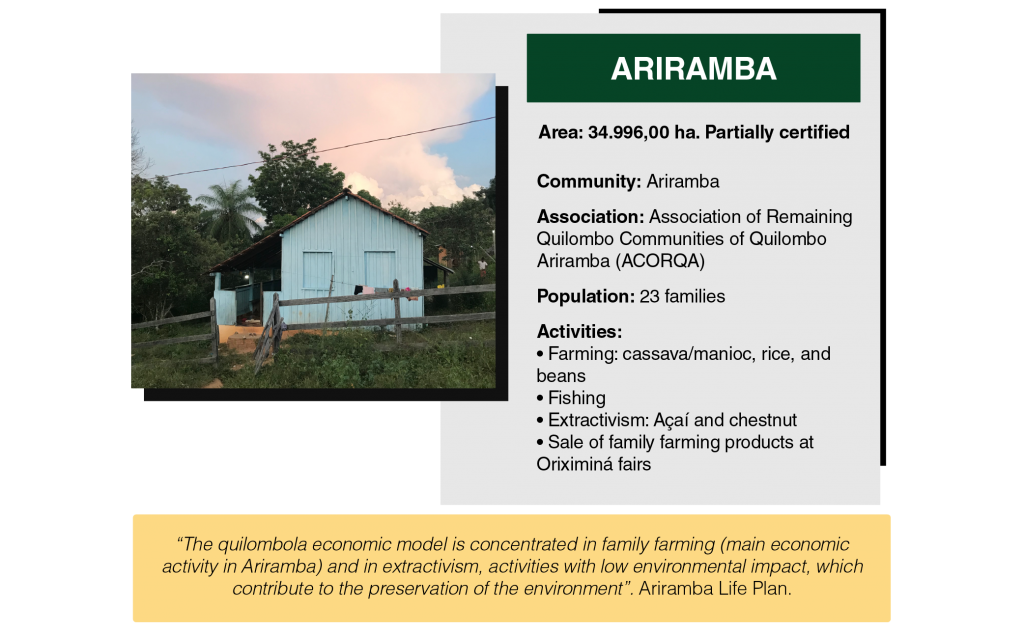 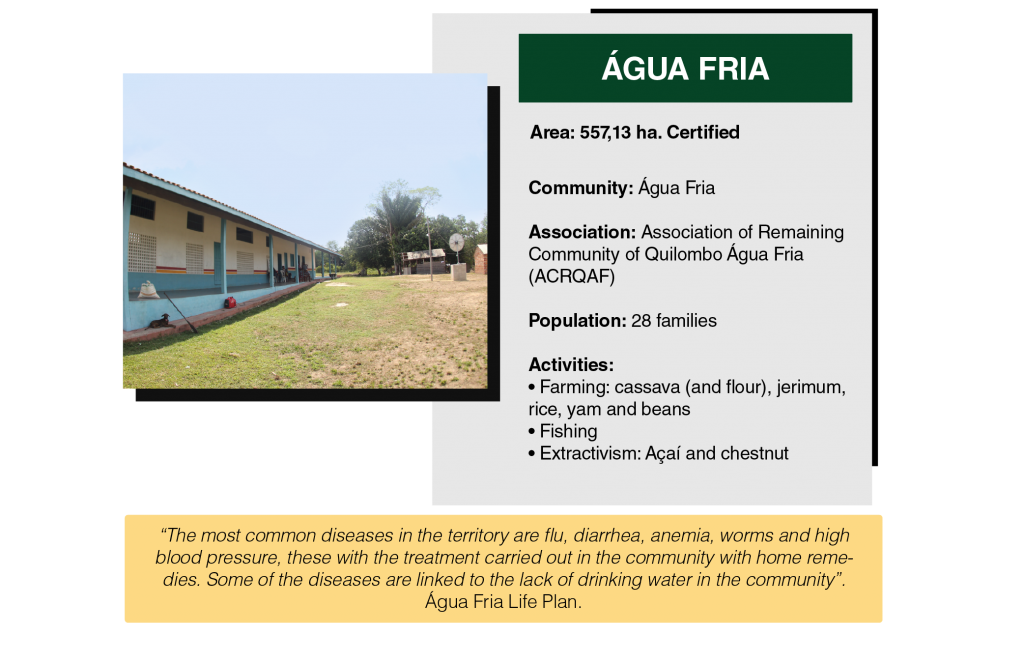 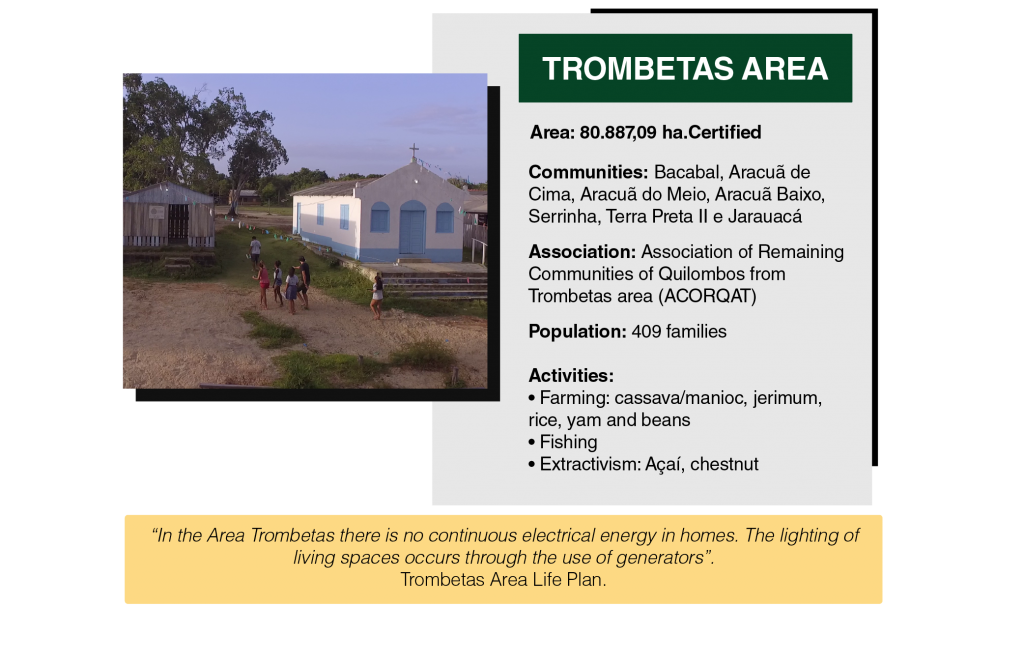 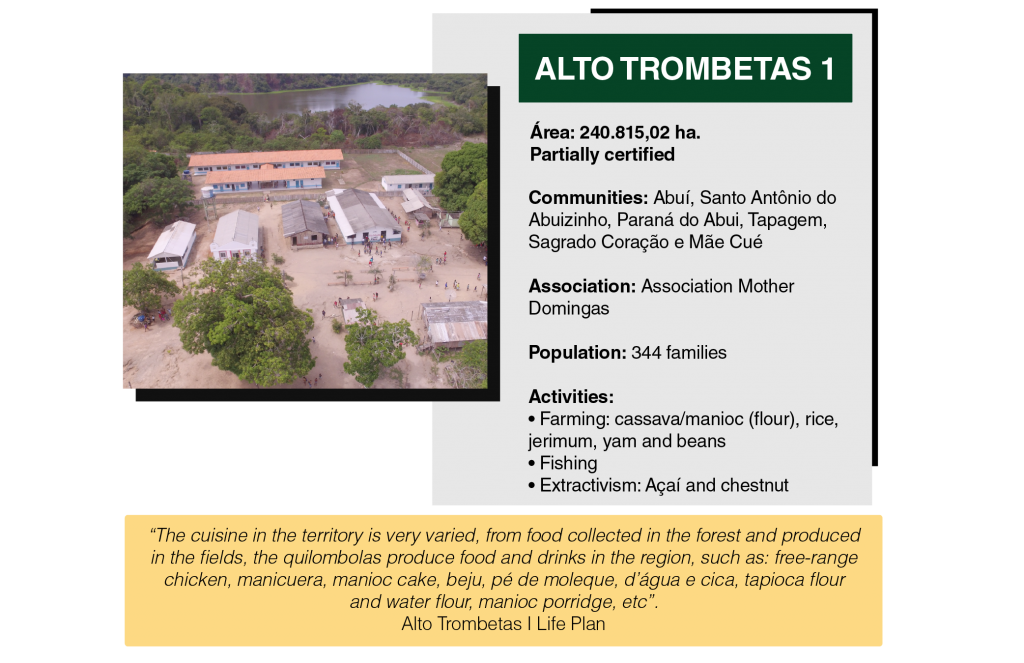 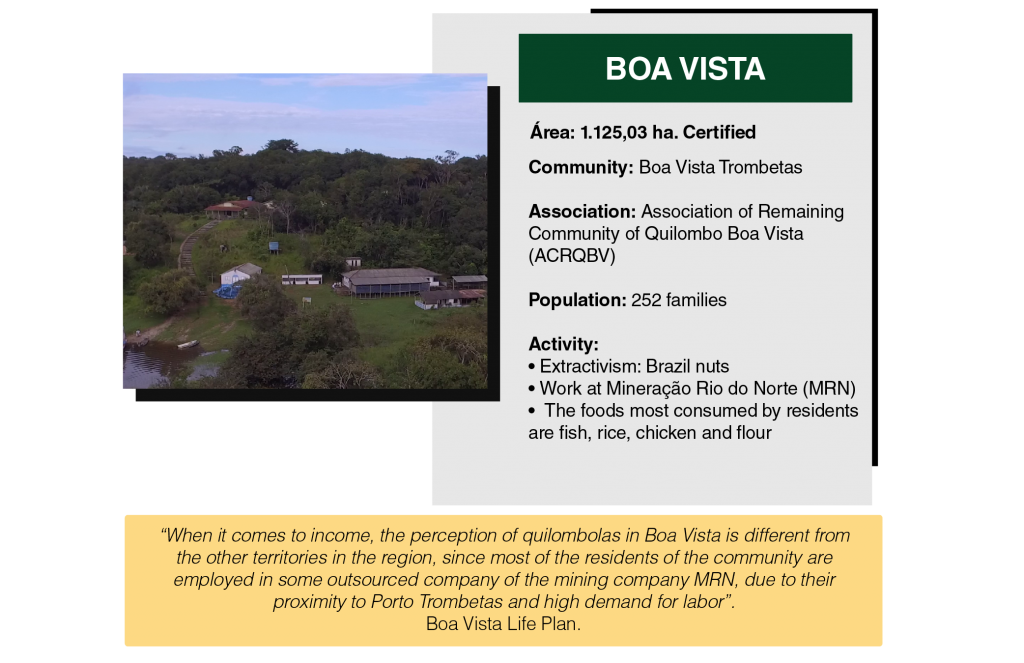 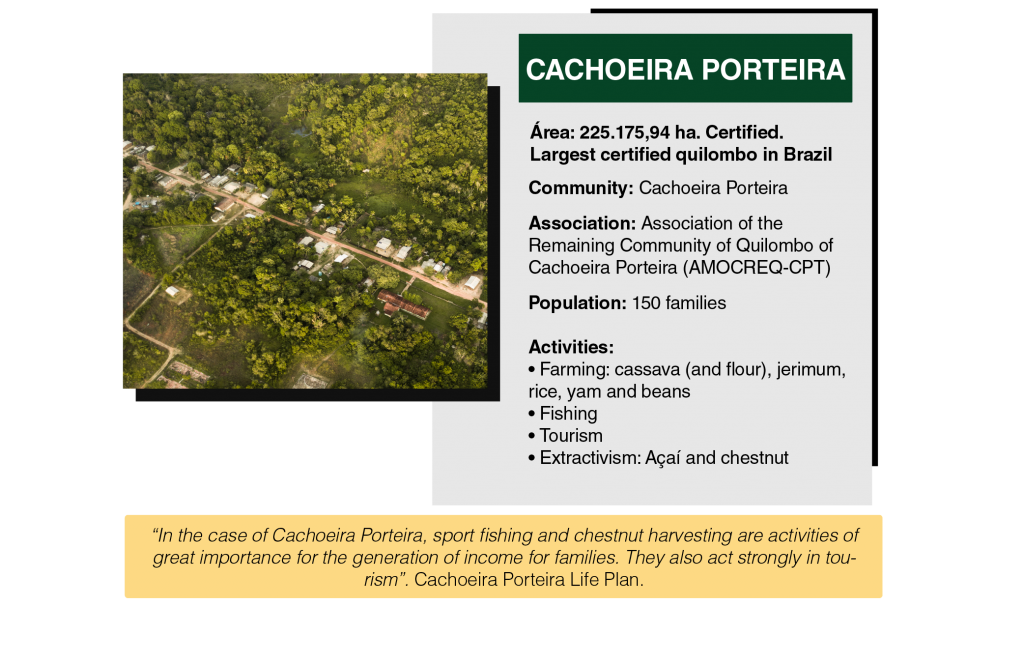 Alto Trombetas II is also part of the region, but it is not represented in this mapping.

HOW THE ANALYSIS WAS DONE

In order to map the vulnerability of communities in the face of the advance of the pandemic, we consider several factors that can increase or decrease the risk on the scale of territories, communities and municipalities. In all, 17 indicators from community organizations, public agencies and primary data were analyzed. Of this total, 14 are common to Indigenous Lands and Quilombola Territories. This means that in the case of quilombola communities we were able to analyze 3 more indicators due to the data collection made by the communities themselves during the activities of Sharing Worlds.

After collecting and organizing the data, data correlation work was carried out, which is nothing more than understanding how together the factors can more or less influence the level of vulnerability of the communities. At this stage, demographic data such as size and age of the population were correlated to those of logistics. This is because villages with a greater number of people and a higher percentage of elderly people are already in an alert situation, and if in addition the logistical situation means a greater flow of people, this alert becomes bigger, the risk increases. A village with these characteristics can be a priority compared to a smaller, younger community without large flows of people, for example. However, it is important to note that risk mapping is not a determination, it is a tool for creating strategies and these depend on decisions that can be made based on this type of multicriteria analysis.

Another example is the importance of food security related to logistics. Communities that have a low variety of food produced and are still unable to dispose of this production, are unable to supplement their food because the sale of these products is essential for the purchase of basic items such as protein and other foods not produced in the community itself. This directly impacts people’s health. Such a situation increases the level of risk in such a community and may indicate the urgency of logistical support, even though the crisis is a health one.

These and other factors were considered, always together, and can be explored in the maps provided. It is important to note that, in general, traditional populations from all over the country are part of the vulnerable group in the face of the pandemic, due to the scarce infrastructure and low implementation of public policies appropriate to the reality of these communities.

However, given the chaotic scenario, prioritizing resources for certain more emergency actions can be decisive for the lives of traditional populations. In this way, this analysis was built in an attempt to support decision makers (from different spheres) in the development of more effective contingency strategies that contemplate all the complexity of traditional territories.

In view of the vulnerability scenario of these communities, some priority actions are necessary and some of them are already being carried out by different partners from the third sector, the private and public sectors, such as the donation of basic baskets and hygiene kits for the communities, confection and donation of masks of reusable fabrics, construction of informative material on the prevention of Coronavirus, support in the flow of production from villages and quilombos and support in the dialogue with local public institutions.

But it is necessary to understand that these actions must not only be punctual, but continuous throughout the period of social distancing, while others must go further, being strengthened for the post-pandemic period – as is the case with support in the flow of production and security promoting the strengthening of the economy in quilombos and Indigenous Lands.

It is important to have integrated action from different sectors in the region, such as community associations, the public sector, the private sector and the third sector. Joint action is the way to guarantee the safety and survival of these communities in this pandemic moment and also to reduce the socioeconomic impacts that will be installed after the pandemic.

Finally, it is essential to scale the analyzes, such as those presented here, to other States and Regions, to obtain information that goes beyond the number of confirmed cases, deaths, recovered cases, etc. And so, in fact, to acquire instruments that allow for more accurate decision-making, thus reducing the impact of COVID-19 for the Quilombola and Indigenous communities of Brazil. 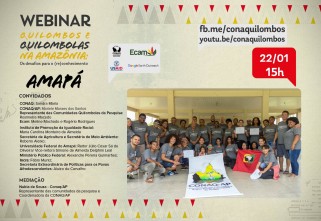 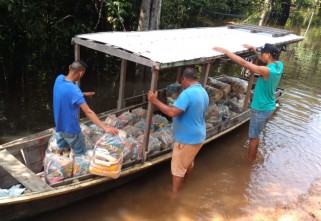 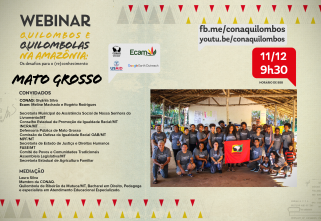